I wanted to share this wonderful dream I recently had. It’s the one where I read David Mitchell’s novel number9dream and found myself lost within its labyrinthine structure. The good news is that I managed to escape, although the work continues to leave an imprint on my mind. The truth is the experience wasn’t a dream at all, but a novel I’ve spent the last few weeks absorbing slowly and trying to decide if I actually loved it. The first time I read David Mitchell (it was Cloud Atlas), it blew my mind. Immediately, I was convinced that he was one of the greatest writers within the past century. Since then I’ve read Ghostwritten, The Bone Clocks, and for the second time his horror novel Slade House. Although Mitchell has become a constant favorite, I’m still unsure regarding my feelings regarding this latest read. 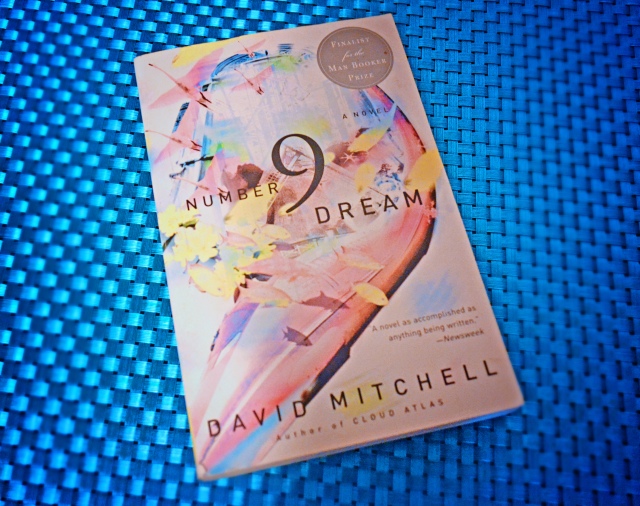 The title of this novel comes from a John Lennon song, much the way Norwegian Wood, the title of Haruki Murakami’s novel, came from an old Beatles song. A novel that takes its influence from two of my heroes has the makings of a beautiful masterpiece. This book is Mitchell’s second release following the world-spanning and multiple protagonist work Ghostwritten. At first glance, number9dream appears to be more of a mainstream novel as the action follows one singular character. Eiji Miyake is a young man who has arrived in Tokyo searching for the father he never knew. While the absent father story line is a typical motif in a quest novel, the work quickly takes on multiple meanings under the skilled hands of its author. Eiji becomes involved in several different narratives, such as falling in love with a pianist who possesses “the perfect neck” as well as getting involved in a gang war while holding down a series of low-level jobs to support himself. I question if Mitchell’s mind often works at the same pace as his novels as the poor man must be breathless all the time.

If there is one characteristic that defines a David Mitchell novel, the word “genre-bending” comes to mind. Alternating the styles of detective story, action movie, cyberpunk thriller, and romance, this is a work that refuses to stay put for any length of time. I honestly believe that Mitchell could write a straight novel in any style, and perhaps it’s his strict refusal to adhere to just one style that makes his novels so endearing to the reading public. Mitchell makes this story a tribute to the works of Murakami, such as large sections of the novel which showcase Eiji’s dreams or fantasies. His interactions with an assorted cast of oddballs and misfits are variations of elements that would be right at home in a Murakami novel. Mitchell leans heavily on the bizarre, Kafkaesque developments that leave you questioning which parts are reality and which are fantasy. I suppose life can be like that as well.

Like with many heroes, Eiji is a spiritual orphan as his father abandoned his mother, and his alcoholic mother in turn abandoned Eiji and his twin sister, Anju, many years ago. Beneath the quest of finding his absent father, we learn of a tragedy that runs very deep. Just when our hero believes he has found answers, he is quickly thrust down another rabbit hole. Some of these adventures are simply fantasies as Eiji has a rather active imagination. Others, such as the horrific scenes involving two warring gangs are straight out of a work by Tarantino. Interspersed with the violent and cinematic scenes are glimpses of Eiji’s day-to-day existence in Tokyo, where he lives in a small room above a video store, and flashbacks of his childhood in the Japanese countryside, where he and his twin sister grew up.

“maybe the meaning of life lies in looking for it”

Despite alternating sections which move at a variety of paces, this novel is a highly philosophical piece on the theme that the meaning of life lies in the adventure itself rather than the goal. Eiji soon finds the initial journey of finding his father lost beneath the all the other quests he endures. This search for meaning is not limited to its title character. Eiji’s friend Suga wants to hack his way into the Pentagon’s computer; the young woman named Ai, who becomes the object of Eiji’s affection, wants to move to Paris to study music; and his landlord Buntaro simply wants to be a good father as his wife is pregnant for the first time. One of the themes that is the focus of this novel is that in life we often have to redefine our dreams, our goals. As we get older, we change and so what becomes meaningful also changes.

I’m a firm believer that some novels cannot be fully appreciated the first time they are read, and I highly suspect that number9dream is one of those works. Similar to taking on a new endeavor or walking down an unfamiliar path for the first time, you often become overwhelmed by the experience itself. The lingering after effects are what persuades you to pick up the work a second time. I have a strong suspicion I will be rereading all of Mitchell’s novels once I get them all finished for the first time.

“A book you finish reading is not the same book it was before you read it.”

Read as my fourth book for the TBR Challenge.