While it is a truth universally acknowledged that a novel written by Jane Austen is a beautiful work worthy of the highest devotion, another lesser known truth is that an incomplete Austen novel is the purest form of incredible heartache. 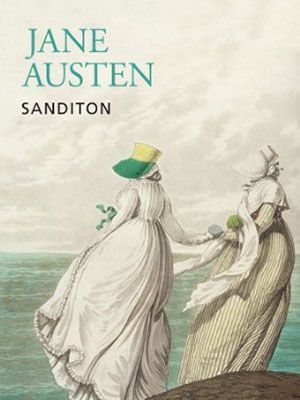 In January of 1817, Jane Austen began work on a new novel that would surely be regarded as one of her finest creations. Sadly, she would never complete it. Austen became gravely ill, forcing her to stop writing it after just over eleven chapters. She passed away four months later to what is believed to be Addison’s disease. The public would not be introduced to this new world Austen created for over a century, not until the existing chapters were finally published in 1925. It is believed Austen intended to title the book The Brothers, but her family decided on Sanditon. The existing fragment of this novel held quite a lot of promise with Austen’s trademark comedic wit, a colorful cast of characters, and an exquisite setting.

I first read Sanditon shortly after my discovery of Jane Austen. During my first year blogging about books, I found a completed version written “by Jane Austen and Another Lady” (click here for my review). I completely fell in love. Although I immensely enjoyed it, I was left wondering about what might have been had Austen completed it. Based on its opening chapters, I dare say it might have changed some readers’ perceptions about their favorite Austen novel.

The heroine of Sanditon is Charlotte Heywood, the daughter of a large family in Willingden, Sussex. When the carriage of Mr. and Mrs. Parker of is involved in an accident, it puts them into the acquaintance of the Heywoods. The Parkers stay with their new friends for a short duration while the carriage is repaired and Mr. Parker recovers from his injury of a sprained ankle. The Heywoods learn that Mr. Parker and his partner, Lady Denham, are working together on a project to turn the seaside town of Sanditon into the largest resort on the English coast. When the Parkers return two weeks later, they agree to bring Charlotte with them. The young girl becomes completely mesmerized by Sanditon and its colorful array of characters. My favorites among the group are Sir Edward Denham, a grand fool who loves to quite romantic literature, and the younger siblings of Mr. Parker who identify themselves as sickly invalids. With the opening chapters, Austen laid the groundwork to a fascinating story which had the potential to take the writer into some new directions.

“Those who tell their own story you know must be listened to with caution.”

As with all of her other works, Sanditon attracted supporters and detractors in equal measure. While many believed in its innovative style, critics such as E.M. Forster believed that Austen’s lingering illness and approaching death overshadowed the work itself. Personally, I disagree with this opinion but I do believe this novel held a slight autobiographical element to it. As I mentioned in a previous post about how Jane Austen Made Me a Better Person, I discussed the vitality with which Sanditon was written. Little is known regarding the inspiration for this work, but as health is a recurring theme it stands to reason that perhaps through her writing Austen sought some help with her own failing body. During this time, many believed in the healing properties of the sea and the use of outside bathing machines. As someone who loves nothing more than to relax quietly by the beach, I believe in the healing properties of the shore but as a more mental than physical. Whether it’s the feel the sand, the smell of the water, or the peaceful atmosphere, you can’t help but feel stronger. Austen paints such a vivid picture of Sanditon that you cannot help but feel at peace.

“He held it indeed as certain, that no person, […] could be really in a state of secure and permanent Health without spending at least six weeks by the Sea every year.”

Although the Parker siblings take the concept of hypochondria to new levels, I believe that they were created beyond simple comedy relief. As our strength is also largely mental, so is our sickness. Our anxieties and fears for the future can often have devastating effects on our physical health. Austen knew this better than anybody. She knew that hypochondriacs were’s wrong they just focused on the end too soon. While it is a sad truth that everyone dies, it isn’t necessarily from that which we have spent our lives fearing.

A final point I would like to mention is that Austen is often criticized for avoiding the “big” issues of her times. I would disagree on this statement for two reasons. First, Austen is one of the best writers of human behavior that ever lived. She understood that our connections to others are the big issues. Through making her novels about social interactions, she transcended any one period and created timeless works. Sanditon is filled with interactions between interesting and fallible human beings. This isn’t to say that particular events of her lifetime weren’t explored in some ways. Another theme of the book involves the conflicting ideas of progress vs. tradition. Mr. Parker is a businessman who wants nothing more than to make money for the current fad of coastal resorts and their believed health benefits. Austen was living in a time where the world would be changing following war. How exciting it would have been to see her thoughts on the changing world had she lived longer.

I’m quite excited to reread these existing chapter of Sanditon along with Lady Susan and The Watsons. I am also very much looking forward to the upcoming Masterpiece series. Unfortunately, we will never know what Austen originally intended with Sanditon. Although we only received a partial view, the image of the quiet seaside town continues to remain with me.

“But Sanditon itself — everybody has heard of Sanditon. The favourite — for a young and rising bathing-place — certainly the favourite spot of all that are to be found along the coast of Sussex; the most favoured by nature, and promising to be the most chosen by man.”

Have you read this book? I’d love to know your thoughts! Sound off with a comment down below.