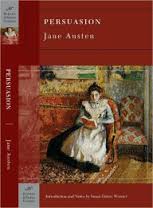 I have a confession to make: I am a huge fan of Jane Austen. My literary love affair began when I first read Pride and Prejudice about two years ago. I have also read Northanger Abbey which became a huge favorite.  As a male reader, I always wondered if I was in the minority regarding my obsession with Ms. Austen. After all, her works are not exactly filled with huge epic quests. For me, her novels are a relaxing escape. There is just something calming about reading a Jane Austen novel. Since completing Persuasion, I can now say I have read half of her novels as sadly she died at a very young age.

Austen’s novels are comedic looks at relationships and social gatherings in upper-class nineteenth-century England. One of the huge appeals for me is that her novels are always filled with a fun cast of humorous characters. I think if Jane Austen were alive today, she would definitely be a sitcom writer.

This novel takes its title from how we are often persuaded by others in a way that conflicts with what we truly want. This story focuses on Anne Elliot, a member of a very prestigious English family. Due to severe financial trouble, Anne’s father has to rent out their estate. It is then that Anne becomes reacquainted with Captain Wentworth, a man she was involved with years ago but rejected his marriage proposal due to some advice by her Godmother who believed he was not worthy of her due to his lower social status. Wentworth, now a man of wealth and high social status due to his successful military career, reawakens feelings in Anne. Although much more sensible than the other members of her family, Anne is facing a life of spinsterhood as she is still single at the ripe old age of…..27.

Just like with her other novels, Austen uses a love story in order to explore and make fun of social situations. I really liked the character of Anne, whose sensibilities actually remind me of my beautiful wife. Like Anne, she tends to be the sensible one that has to put up with the crazy members of her family. I think Anne Elliot is definitely my favorite Jane Austen heroine. However, it was the supporting cast that really makes this book. Anne’s father Walter Elliot is a man who only care about two things: social status and physical beauty. Anne’s sisters lead you to wonder how Anne could put up with them. Austen excels in creating humorous characters in her novels, and this one is no exception.

One complaint I have about Persuasion as I do with the other two Austen novels I have read is how quickly everything works out in the end. It’s not that I have a problem with happy endings, but in this case it seems like things were resolved quickly in the final chapter. However, out of the four novels I’ve read, I would rank this one at the top of my list.

“It was perhaps, one of those cases in which advice is good or bad only as the event decides.”